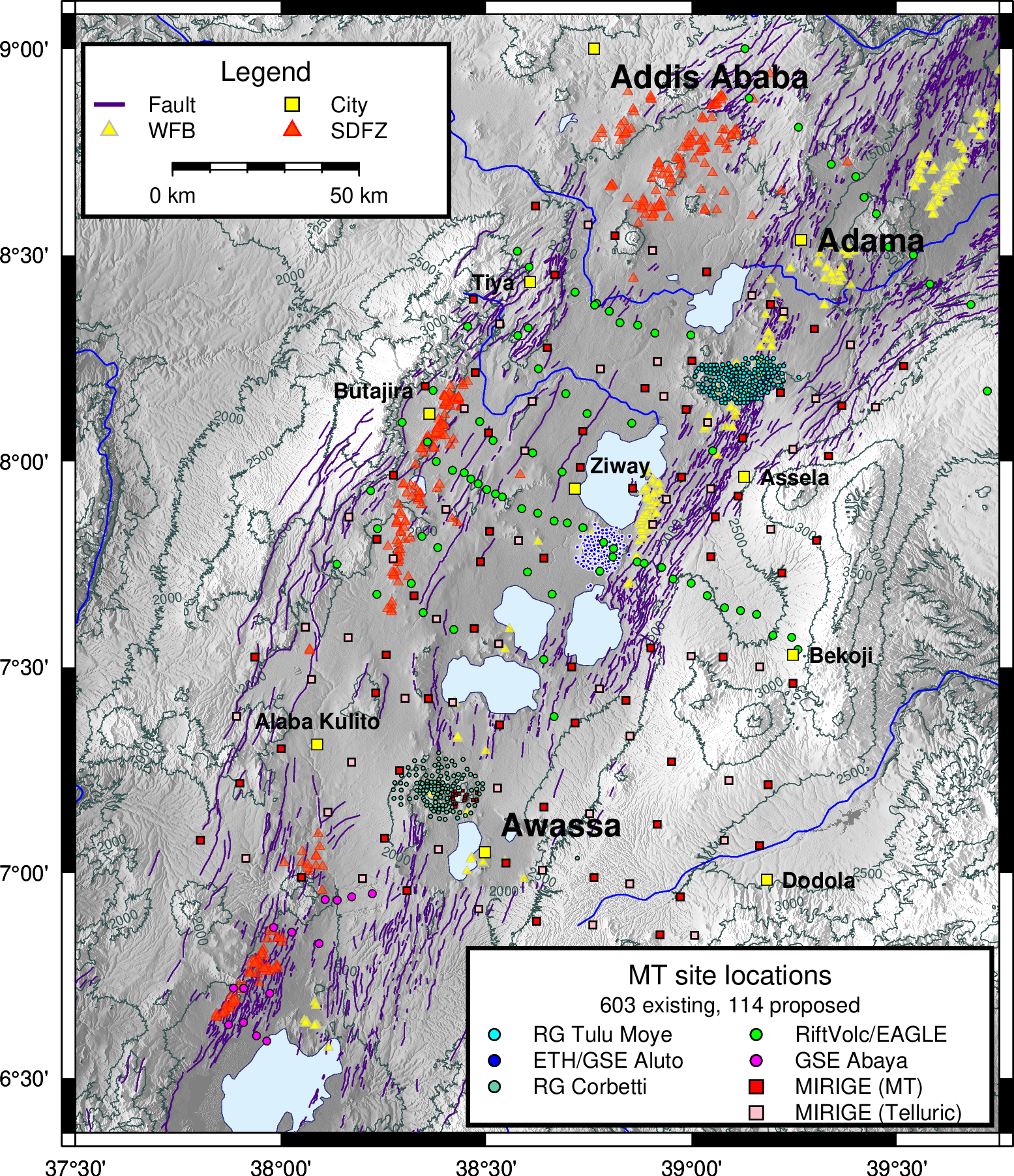 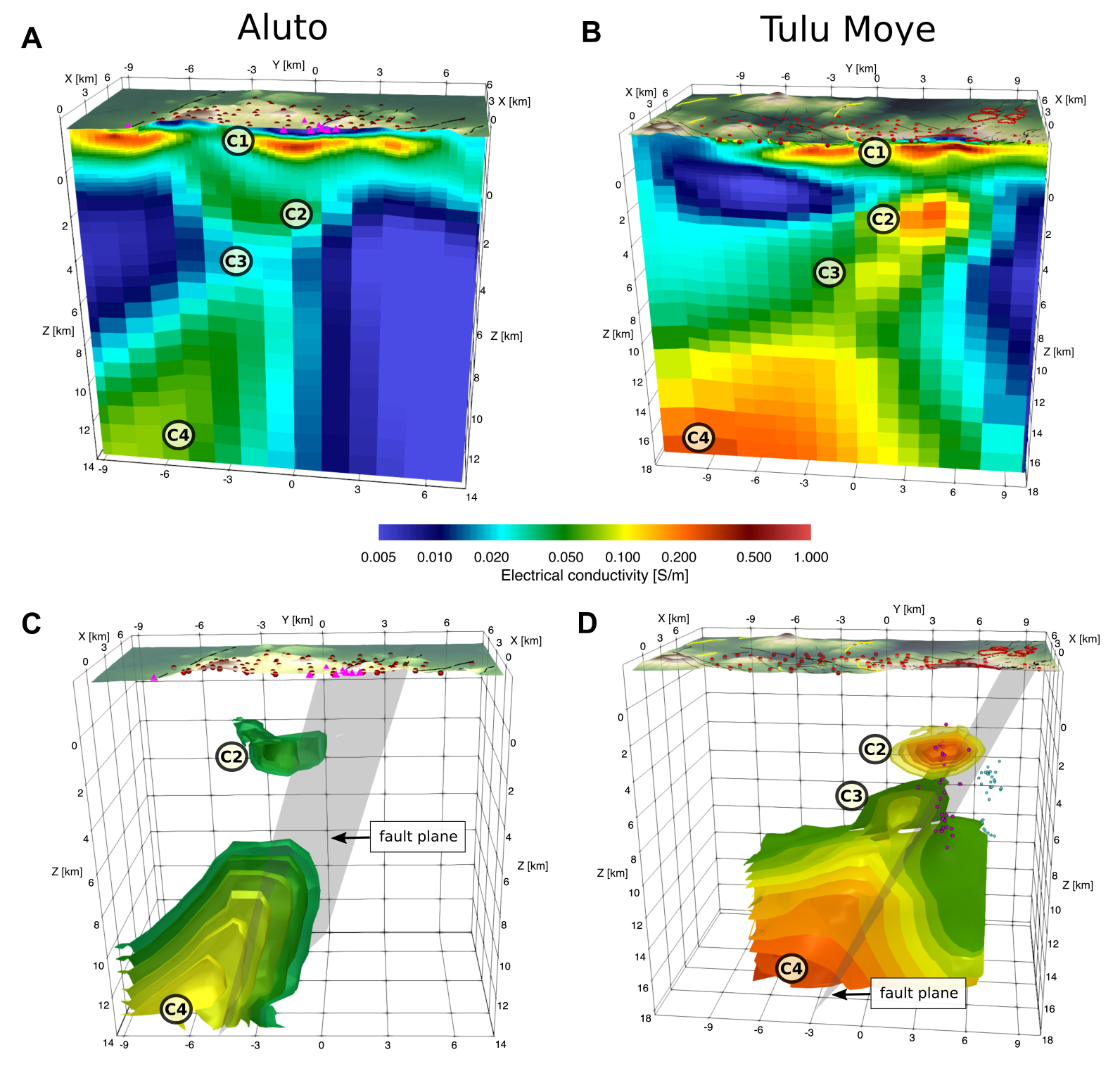 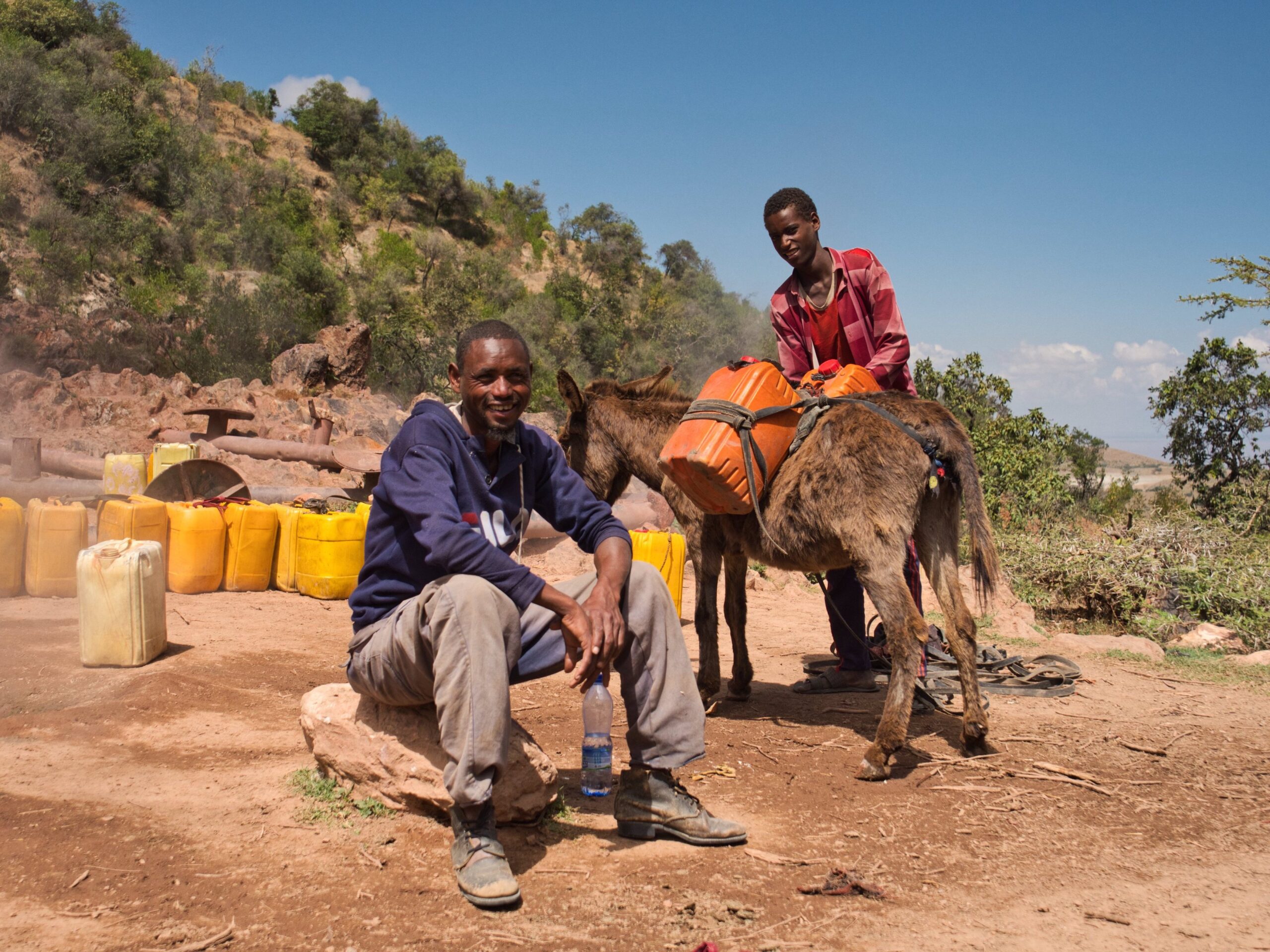 Samrock, F., A.V. Grayver, O. Bachmann, Ö. Karakas, and M.O. Saar, Integrated magnetotelluric and petrological analysis of felsic magma reservoirs: Insights from Ethiopian rift volcanoes , Earth and Planetary Science Letters, 559/116765, 2021. [Download PDF] [View Abstract]Geophysical and petrological probes are key to understanding the structure and the thermochemical state of active magmatic systems. Recent advances in laboratory analyses, field investigations and numerical methods have allowed increasingly complex data-constraint models with new insights into magma plumbing systems and melt evolution. However, there is still a need for methods to quantitatively link geophysical and petrological observables for a more consistent description of magmatic processes at both micro- and macro-scales. Whilst modern geophysical studies provide detailed 3-D subsurface images that help to characterize magma reservoirs by relating state variables with physical material properties, constraints from on-site petrological analyses and thermodynamic modelling of melt evolution are at best incorporated qualitatively. Here, we combine modelling of phase equilibria in cooling magma and laboratory measurements of electrical properties of melt to derive the evolution of electrical conductivity in a crystallizing silicic magmatic system. We apply this framework to 3-D electrical conductivity images from magnetotelluric studies of two volcanoes in the Ethiopian Rift. The presented approach enables us to constrain key variables such as melt content, temperature and magmatic volatile abundance at depth. Our study shows that accounting for magmatic volatiles as an independent phase is crucial for understanding electrical conductivity structures in magma reservoirs at an advanced state of crystallization. Furthermore, our results deepen the understanding of the mechanisms behind volcanic unrest and help assess the long-term potential of hydrothermal reservoirs for geothermal energy production.
Samrock, F., A.V. Grayver, H. Eysteinsson, and M.O. Saar, Magnetotelluric image of transcrustal magmatic system beneath the Tulu Moye geothermal prospect in the Ethiopian Rift, Geophysical Research Letters, 2018. [Download PDF] [View Abstract]Continental rifting is initiated by a dynamic interplay between tectonic stretching and mantle upwelling. Decompression melting assists continental break-up through lithospheric weakening and enforces upflow of melt to the Earth’s surface. However, the details about melt transport through the brittle crust and storage under narrow rift-aligned magmatic segments remain largely unclear. Here we present a crustal scale electrical conductivity model for a magmatic segment in the Ethiopian Rift, derived from 3-D phase tensor inversion of magnetotelluric data. Our subsurface model shows that melt migrates along pre-existing weak structures and is stored in different concentrations on two major interconnected levels, facilitating the formation of a convective hydrothermal system. The obtained model of a transcrustal magmatic system offers new insights into rifting mechanisms, evolution of magma ascent, and prospective geothermal reservoirs.
Samrock, F., A. Kuvshinov, J. Bakker, A. Jackson, and F. Shimeles, 3-D analysis and interpretation of magnetotelluric data from the Aluto-Langano geothermal field, Ethiopia, Geophysical Journal International, 202/3, pp. 1923-1948, 2015. [Download PDF] [View Abstract]The Main Ethiopian Rift Valley encompasses a number of volcanoes, which are known to be actively deforming with reoccurring periods of uplift and setting. One of the regions where temporal changes take place is the Aluto volcanic complex. It hosts a productive geothermal field and the only currently operating geothermal power plant of Ethiopia. We carried out magnetotelluric (MT) measurements in early 2012 in order to identify the source of unrest. Broad-band MT data (0.001-1000 s) have been acquired at 46 sites covering the expanse of the Aluto volcanic complex with an average site spacing of 1 km. Based on this MT data it is possible to map the bulk electrical resistivity of the subsurface down to depths of several kilometres. Resistivity is a crucial geophysical parameter in geothermal exploration as hydrothermal and magmatic reservoirs are typically related to low resistive zones, which can be easily sensed by MT. Thus by mapping the electrical conductivity one can identify and analyse geothermal systems with respect to their temperature, extent and potential for production of energy. 3-D inversions of the observed MT data from Aluto reveal the typical electrical conductivity distribution of a high-enthalpy geothermal system, which is mainly governed by the hydrothermal alteration mineralogy. The recovered 3-D conductivity models provide no evidence for an active deep magmatic system under Aluto. Forward modelling of the tippers rather suggest that occurrence of melt is predominantly at lower crustal depths along an off-axis fault zone a few tens of kilometres west of the central rift axis. The absence of an active magmatic system implies that the deforming source is most likely situated within the shallow hydrothermal system of the Aluto-Langano geothermal field.

Samrock, F., A.V. Grayver, B. Cherkose, A. Kuvshinov, and M.O. Saar, Aluto-Langano Geothermal Field, Ethiopia: Complete Image Of Underlying Magmatic-Hydrothermal System Revealed By Revised Interpretation Of Magnetotelluric Data, Proceedings World Geothermal Congress 2020, 2020. [Download PDF] [View Abstract]Aluto-Langano in the Main Ethiopian Rift Valley is currently the only producing geothermal field in Ethiopia and probably the best studied prospect in the Ethiopian Rift. Geoscientific exploration began in 1973 and led to the siting of an exploration well LA3 on top of the volcanic complex. The well was drilled in 1983 to a depth of 2144m and encountered temperatures of 320°C. Since 1990 Aluto has produced electricity, albeit with interruptions. Currently it is undergoing a major expansion phase with the plan to generate about 70MWe from eight new wells, until now two of them have been drilled successfully. Geophysical exploration at Aluto involved magnetotelluric (MT) soundings, which helped delineate the clay cap atop of the hydrothermal reservoir. However, until now geophysical studies did not succeed in imaging the proposed magmatic heat source that would drive the observed hydrothermal convection. For this study, we inverted 165 of a total of 208 MT stations that were measured over the entire volcanic complex in three independent surveys by the Geological Survey of Ethiopia and ETH Zurich, Switzerland. For the inversion, we used a novel 3-D inverse solver that employs adaptive finite element techniques, which allowed us to accurately model topography and account for varying lateral and vertical resolution. We inverted MT phase tensors. This transfer function is free of galvanic distortions that have long been recognized as an obstacle in MT inversion. Our recovered model shows, for the first time, the entire magmatic-hydrothermal system under the geothermal field. The up-flow of melt is structurally controlled by extensional rift faults and sourced by a lower crustal basaltic mush reservoir. Productive wells were all drilled into a weak fault zone below the clay cap. The productive reservoir is underlain by an electrically conductive upper-crustal feature, which we interpret as a highly crystalline rhyolitic mush zone, acting as the main heat source. Our results demonstrate the importance of a dense MT site distribution and state-of-the-art inversion tools in order to obtain reliable and complete subsurface models of high enthalpy systems below volcanic geothermal prospects.