In light of global challenges, the Swiss Agency for Development and Cooperation (SDC) and the Swiss National Science Foundation (SNSF) launched in 2012 the joint Swiss Programme for Research on Global Issues for Development (r4d programme). The main goal of the r4d programme is the generation of new knowledge and the application of research results that contribute to solving global problems and securing public goods in low- and middle-income countries with the framework of global sustainable development. The r4d programme consists of six modules, five with thematic priorities and one for thematically open calls. For more information, please visit http://www.r4d.ch/modules/thematically-open-research/geothermal-exploration-in-mongolia. 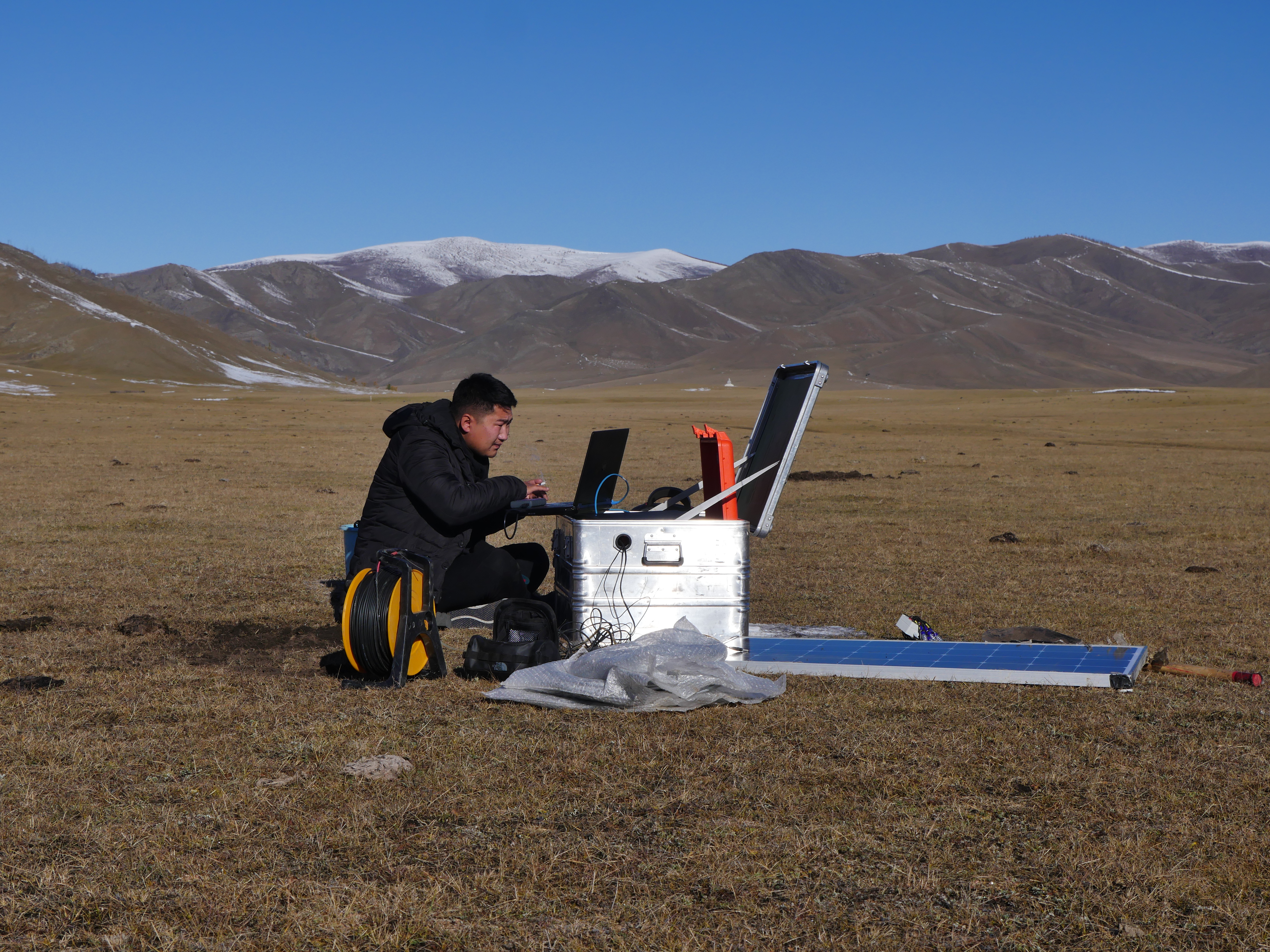 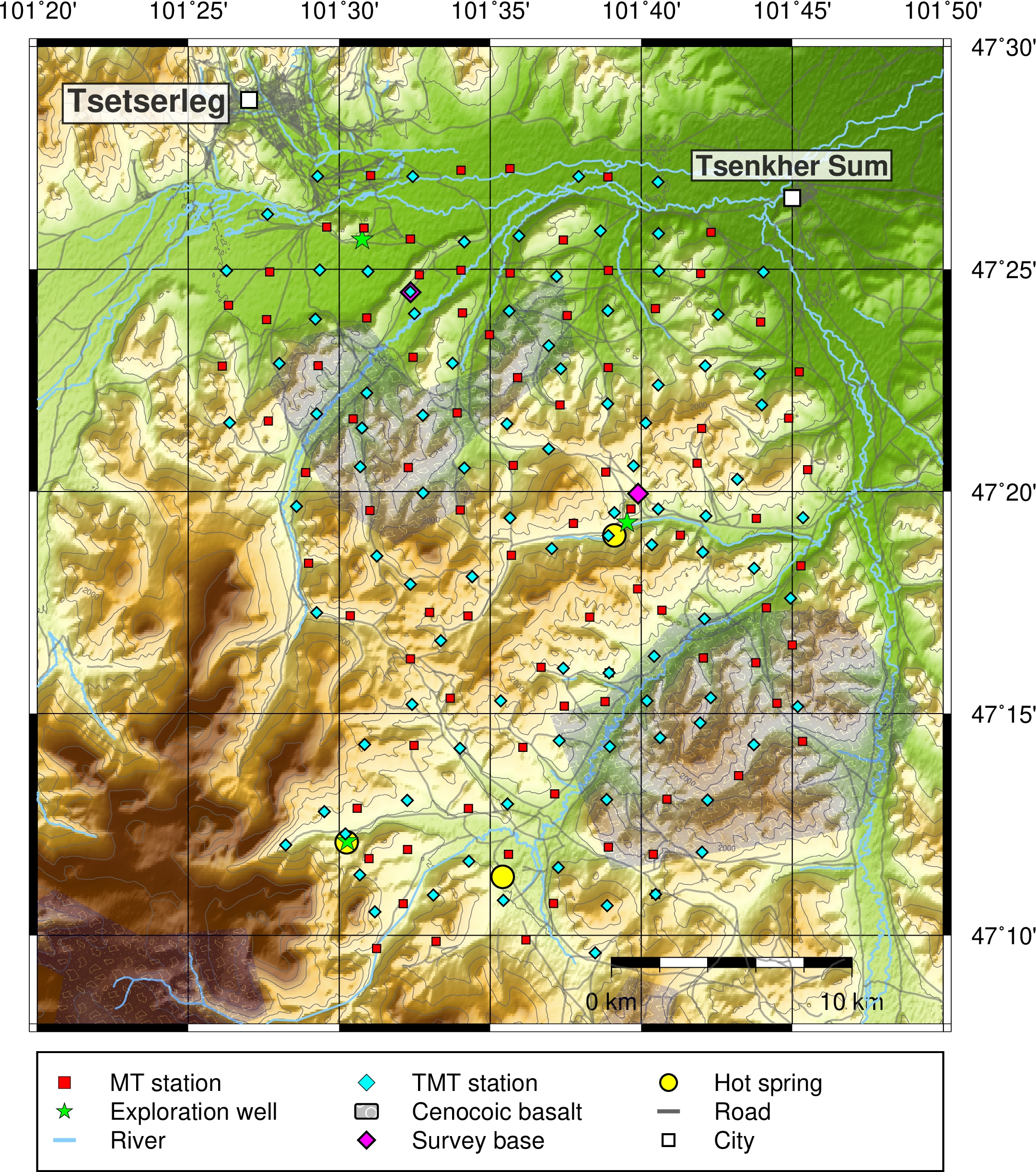 Map of the study region south of Tsetserleg. Symbols denote the 184 magnetotelluric (MT) and telluric stations (TMT) that we measured during the survey in May to June 2019. The geothermal sites are indicated as yellow circles with our survey covering the hot springs of Tsenkher, Bor Tal and Gyalgar.

The existence of numerous hot springs in Mongolia’s Hangai province is indicative for large geothermal energy resources, which are remnants of the region’s volcanic geological history. Previous studies have shown that a combined, geothermal heat and power plant could provide cheap and clean energy for the province center Tsetserleg. With this project we will introduce the missing geophysical component of the so far conducted geothermal exploration program in the Hangai. We will establish scientific methods to image the geothermal reservoir near Tsetserleg, which feeds the hot springs in Tsenkher and Shivert. The result will be of great importance for promoting the construction of geothermal power plant.

This project is a collaboration between ETH Zurich and the Mongolian Academy of Sciences. It is funded by the Swiss Programme for Research on Global Issues for Development (r4d programme) – a joint funding initiative by the Swiss Agency for Development and Cooperation (SDC) and the Swiss National Science Foundation (SNSF).

Hot rock in the subsurface, a remnant from
Hangai’s volcanic history, heats fluids in the underground. Some of the fluids migrate upwards along permeable geological faults, where they result in hot springs as observed in Tsenkher. This hot spring has a flow rate of more than 10l/s and a temperature that exceeds 80°C.
With this project we conduct magnetotelluric (MT) measurements during two field campaigns in 2019 and 2020. Based on the MT data it is possible to construct a 3-D geothermal reservoir model of the region in order to evaluate the potential for heating and energy production. We will use our new MT geophysical soundings for a consistent interpretation together with previously conducted geochemical and geological studies.

Conceptual model for the geothermal system near Tsetserleg and proposed power plants.

The capacity of a geothermal CHP plant in Tsetserleg could reach 1.9 MWe power and 16.7 MWt heat production as shown in a study by Purevsurem Dorj from the National Renewable Energy Center in Ulaanbaatar (Dorj, 2005 and 2015). Such a plant would even exceed the current power and heat consumption in Tsetserleg. Geothermal energy could be a great benefit to all inhabitants. It would result in massively reduced greenhouse gas emissions and lead to improved live and working conditions.

More impression from our work in Mongolia can be found on the k4d website.