Geothermal energy is in principle a limitless energy resource that exists everywhere and is available all hours throughout the year.  However, generating electricity out of the geothermal resource, employing what is the so-called enhanced and advanced geothermal systems, requires access to the deep, the typically, crystalline basement, rock formation, that exhibits a temperature of 150 C or more. For instance, in most regions in Europe, such temperature exists at depths larger than 5 km as the geothermal gradient temperature is around 30 C/km or less. Unfortunately, the conventional mechanical rotary drilling is way too expensive to enable economical geothermal energy extraction from deep crystalline rocks, due to the energy requirement and significant drill bit wear, which caused long tripping time to exchange the worn drill bit. To reduce deep geothermal drilling costs, novel, typically contactless, drilling technologies are required, such as Plasma Pulse Geo Drilling (PPGD).

PPGD uses high voltage impulses (>200 kV) with short rise times (< 0.5 us) to fracture the rock without any mechanical abrasion. Two electrodes transmit these impulses to the rock surface, which induce internal electric discharge inside the rock bulk, forming a plasma channel, increases the tensile pressure, and the rock to fracture eventually, as shown in Figure (1). Consequently, PPGD eliminates the mechanical abrasion and the common moving parts in the traditional mechanical rotary drilling, such as drilling string. This absence of mechanical abrasion elongates the bit lifetime and shortens the tripping time significantly, which reduces the drilling cost. In this project, we perform numerical modeling and lab experiments to understand the physics underline the Plasma Pulse Geo Drilling and examine its viability under deep wellbore conditions of 5 km, i.e., temperatures up to 150 C and pressure up to 150 MPa.

Here, we perform plasma, electrostatic and thermomechanical modeling to understand the rock fracture on the pore-scale using the PPGD. Therefore, we can investigate the key characteristics of the rock and optimize the operating condition.  All models are based on the Multiphysics simulator, MOOSE Framework.

Here, we examine the performance of the PPGD under the deep wellbore conditions (pressure ~ 150 MPa, and temperature ~ 150 C), simulating the 5 km depth. Therefore, we can understand the PPGD behavior under these extreme conditions. We run the experiments in IEG, Fraunhofer (International Geothermal Center, formerly), Bochum, Germany. As a partner, SwissGeoPower AG is the supplies the Marx generator (PULSREX20). Our experimental campaign includes three phases, loading frame experiments, mini i.BOGS experiments, and the i.BOGS experiments. Figure 2 shows a schematic of the first experimental phase, the loading frame. 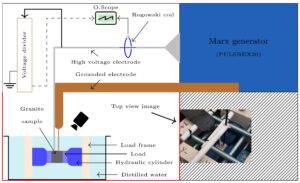 Plasma Pulse Geo Drilling (PPGD) is a contact-less drilling technique, where an electric discharge across a rock sample causes the rock to fracture. Experimental results have shown PPGD drilling operations are successful if certain electrode spacings, pulse voltages, and pulse rise times are given. However, the underlying physics of the electric breakdown within the rock, which cause damage in the process, are still poorly understood.

This study presents a novel methodology to numerically study plasma generation for electric pulses between 200 to 500 kV in rock pores with a width between 10 and 100 \(\mu\)m. We further investigate whether the pressure increase, induced by the plasma generation, is sufficient to cause rock fracturing, which is indicative of the onset of drilling success.

We find that rock fracturing occurs in simulations with a 100 \(\mu\)m. pore size and an imposed pulse voltage of approximately 400 kV. Furthermore, pulses with voltages lower than 400 kV induce damage near the electrodes, which expands from pulse to pulse, and eventually, rock fracturing occurs. Additionally, we find that the likelihood for fracturing increases with increasing pore voltage drop, which increases with pore size, electric pulse voltage, and rock effective relative permittivity while being inversely proportional to the rock porosity and pulse rise time.

Vogler, D., S.D.C. Walsh, and M.O. Saar, A Numerical Investigation into Key Factors Controlling Hard Rock Excavation via Electropulse Stimulation, Journal of Rock Mechanics and Geotechnical Engineering, 12/4, pp. 793-801, 2020. [Download PDF] [View Abstract]Electropulse stimulation provides an energy-efficient means of excavating hard rocks through repeated application of high voltage pulses to the rock surface. As such, it has the potential to confer significant advantages to mining and drilling operations for mineral and energy resources. Nevertheless, before these benefits can be realized, a better understanding of these processes is required to improve their deployment in the field. In this paper, we employ a recently developed model of the grain-scale processes involved in electropulse stimulation to examine excavation of hard rock under realistic operating conditions. To that end, we investigate the maximum applied voltage within ranges of 120~kV to 600~kV, to observe the onset of rock fragmentation. We further study the effect of grain size on rock breakage, by comparing fine and coarse grained rocks modeled after granodiorite and granite, respectively. Lastly, the pore fluid salinity is investigated, since the electric conductivity of the pore fluid is shown to be a governing factor for the electrical conductivity of the system. This study demonstrates that all investigated factors are crucial to the efficiency of rock fragmentation by electropulsing.

Rossi, E., B. Adams, D. Vogler, Ph. Rudolf von Rohr, B. Kammermann, and M.O. Saar, Advanced drilling technologies to improve the economics of deep geo-resource utilization, Proceedings of Applied Energy Symposium: MIT A+B, United States, 2020 , 8, pp. 1-6, 2020. [Download PDF] [View Abstract]Access to deep energy resources (geothermal energy, hydrocarbons) from deep reservoirs will play a fundamental role over the next decades. However, drilling of deep wells to extract deep geo-resources is extremely expensive. As a fact, drilling deep wells into hard, crystalline rocks represents a major challenge for conventional rotary drilling systems, featuring high rates of drill bit wear and requiring frequent drill bit replacements, low penetration rates and poor process efficiency. Therefore, with the aim of improving the overall economics to access deep geo-resources in hard rocks, in this work, we focus on two novel drilling methods, namely: the Combined Thermo-Mechanical Drilling (CTMD) and the Plasma-Pulse Geo-Drilling (PPGD) technologies. The goal of this research and development project is the effective reduction of the costs of drilling in general and particularly regarding accessing and using deep geothermal energy, oil or gas resources. In this work, we present these two novel drilling technologies and focus on evaluating the process efficiency and the drilling performance of these methods, compared to conventional rotary drilling.