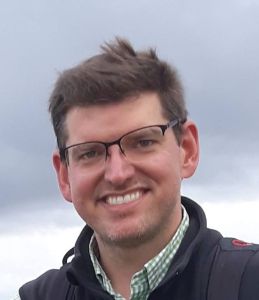 Underlined names are links to current or past GEG members

Plasma Pulse Geo Drilling (PPGD) is a contact-less drilling technique, where an electric discharge across a rock sample causes the rock to fracture. Experimental results have shown PPGD drilling operations are successful if certain electrode spacings, pulse voltages, and pulse rise times are given. However, the underlying physics of the electric breakdown within the rock, which cause damage in the process, are still poorly understood.

This study presents a novel methodology to numerically study plasma generation for electric pulses between 200 to 500 kV in rock pores with a width between 10 and 100 \(\mu\)m. We further investigate whether the pressure increase, induced by the plasma generation, is sufficient to cause rock fracturing, which is indicative of the onset of drilling success.

We find that rock fracturing occurs in simulations with a 100 \(\mu\)m. pore size and an imposed pulse voltage of approximately 400 kV. Furthermore, pulses with voltages lower than 400 kV induce damage near the electrodes, which expands from pulse to pulse, and eventually, rock fracturing occurs. Additionally, we find that the likelihood for fracturing increases with increasing pore voltage drop, which increases with pore size, electric pulse voltage, and rock effective relative permittivity while being inversely proportional to the rock porosity and pulse rise time.

2.
Rossi, E., B. Adams, D. Vogler, Ph. Rudolf von Rohr, B. Kammermann, and M.O. Saar, Advanced drilling technologies to improve the economics of deep geo-resource utilization, Proceedings of Applied Energy Symposium: MIT A+B, United States, 2020 , 8, pp. 1-6, 2020. [Download PDF] [View Abstract]Access to deep energy resources (geothermal energy, hydrocarbons) from deep reservoirs will play a fundamental role over the next decades. However, drilling of deep wells to extract deep geo-resources is extremely expensive. As a fact, drilling deep wells into hard, crystalline rocks represents a major challenge for conventional rotary drilling systems, featuring high rates of drill bit wear and requiring frequent drill bit replacements, low penetration rates and poor process efficiency. Therefore, with the aim of improving the overall economics to access deep geo-resources in hard rocks, in this work, we focus on two novel drilling methods, namely: the Combined Thermo-Mechanical Drilling (CTMD) and the Plasma-Pulse Geo-Drilling (PPGD) technologies. The goal of this research and development project is the effective reduction of the costs of drilling in general and particularly regarding accessing and using deep geothermal energy, oil or gas resources. In this work, we present these two novel drilling technologies and focus on evaluating the process efficiency and the drilling performance of these methods, compared to conventional rotary drilling.
1.
Garapati, N., B.M. Adams, J.M. Bielicki, P. Schaedle, J.B. Randolph, T.H. Kuehn, and M.O. Saar, A Hybrid Geothermal Energy Conversion Technology - A Potential Solution for Production of Electricity from Shallow Geothermal Resources, Energy Procedia, 114, pp. 7107-7117, 2017. [Download PDF] [View Abstract]Geothermal energy has been successfully employed in Switzerland for more than a century for direct use but presently there is no electricity being produced from geothermal sources. After the nuclear power plant catastrophe in Fukushima, Japan, the Swiss Federal Assembly decided to gradually phase out the Swiss nuclear energy program. Deep geothermal energy is a potential resource for clean and nearly CO2-free electricity production that can supplant nuclear power in Switzerland and worldwide. Deep geothermal resources often require enhancement of the permeability of hot-dry rock at significant depths (4-6 km), which can induce seismicity. The geothermal power projects in the Cities of Basel and St. Gallen, Switzerland, were suspended due to earthquakes that occurred during hydraulic stimulation and drilling, respectively. Here we present an alternative unconventional geothermal energy utilization approach that uses shallower, lower-temperature, naturally permeable regions, that drastically reduce drilling costs and induced seismicity. This approach uses geothermal heat to supplement a secondary energy source. Thus this hybrid approach may enable utilization of geothermal energy in many regions in Switzerland and elsewhere, that otherwise could not be used for geothermal electricity generation. In this work, we determine the net power output, energy conversion efficiencies, and economics of these hybrid power plants, where the geothermal power plant is actually a CO2-based plant. Parameters varied include geothermal reservoir depth (2.5-4.5 km) and turbine inlet temperature (100-220 °C) after auxiliary heating. We find that hybrid power plants outperform two individual, i.e., stand-alone geothermal and waste-heat power plants, where moderate geothermal energy is available. Furthermore, such hybrid power plants are more economical than separate power plants.

1.
Adams, B.M., On the power performance and integration of carbon-dioxide plume geothermal (CPG) electrical energy production., Dissertation, University of Minnesota, http://hdl.handle.net/11299/17518, 168 pp., 2015. [View Abstract]CO2 Plume Geothermal (CPG) energy is a method for producing electricity from heat extracted from hot rock layers or reservoirs deep within the earth's crust. CPG is differentiated from other geothermal technologies by several factors: 1) CPG uses CO2 as the primary geologic working fluid instead of brine, 2) CPG utilizes naturally permeable porous reservoirs to extract heat, such as saline aquifers or depleted hydrocarbon reservoirs, 3) CPG is deep--a CPG reservoir must have a depth of 1 km to maintain CO2 in its supercritical state; though depths of 2 to 5 km are more common, and 4) CPG utilizes reservoirs at common geologic temperature gradients, unlike traditional hydrothermal which utilizes shallow reservoirs of unusually high temperature. Thus, CPG is intended to be integrated into an existing CO2 sequestration site affording an economic return on CO2 capture expenses by providing carbon-neutral, dispatchable electricity. Even when CPG is used as a base-load power source, it correlates well with electrical demand, unlike wind and solar (Chapter 5). Typically, CPG configurations consist of one or more injection and production wells. These wells link the surface plant with the porous reservoir to create a fluid circuit. Cooled fluid is injected at the surface, heated within the reservoir, and then returned to the surface at higher temperature and pressure which can then be used to create electricity. The variation in CO2 density between injection and production wells creates a thermosiphon which can drive circulation of CO2 without the use of pumps (Chapter 2). The geologic CO2 can be passed directly through a turbine, called a direct system, or heat can be extracted and used to power an Organic Rankine Cycle, called an indirect system. Either system may be used to generate electricity, although a direct system will nearly always produce more electricity than the indirect system. With reservoirs at moderate depth and temperature, these direct systems will also produce more electricity than comparable brine hydrothermal systems (Chapter 3). The reservoir well spacing and diameter affect the average power and longevity of a CPG system. For every combination of well diameter and reservoir depth, temperature, permeability, and thickness, an optimum spacing between the central injection well and a circumferential collection well will provide the greatest power output over time; placing the collection well too close to the injection well depletes the reservoir too quickly while spacing it too far away increases pressure losses, decreasing the overall power (Chapter 4). Likewise, the selection of too small a well diameter will limit mass flowrate, and thus power, while an oversized well diameter may quickly deplete the reservoir and provide no additional benefit (Chapters 3 & 4). This research has provided a significantly deeper understanding of CPG power systems and their operation. The impact of this work is to establish a basis of CPG research to be used in several ways. It can directly inform industrial developments, such as a green-field implementation of CPG or the long-term planning of a CPG-ready Carbon Capture and Storage site. This work may also be the basis for future economic or policy analyses that can further argue for the development of CPG. Thus, this work will help enable CPG as part of the 21st century energy portfolio.