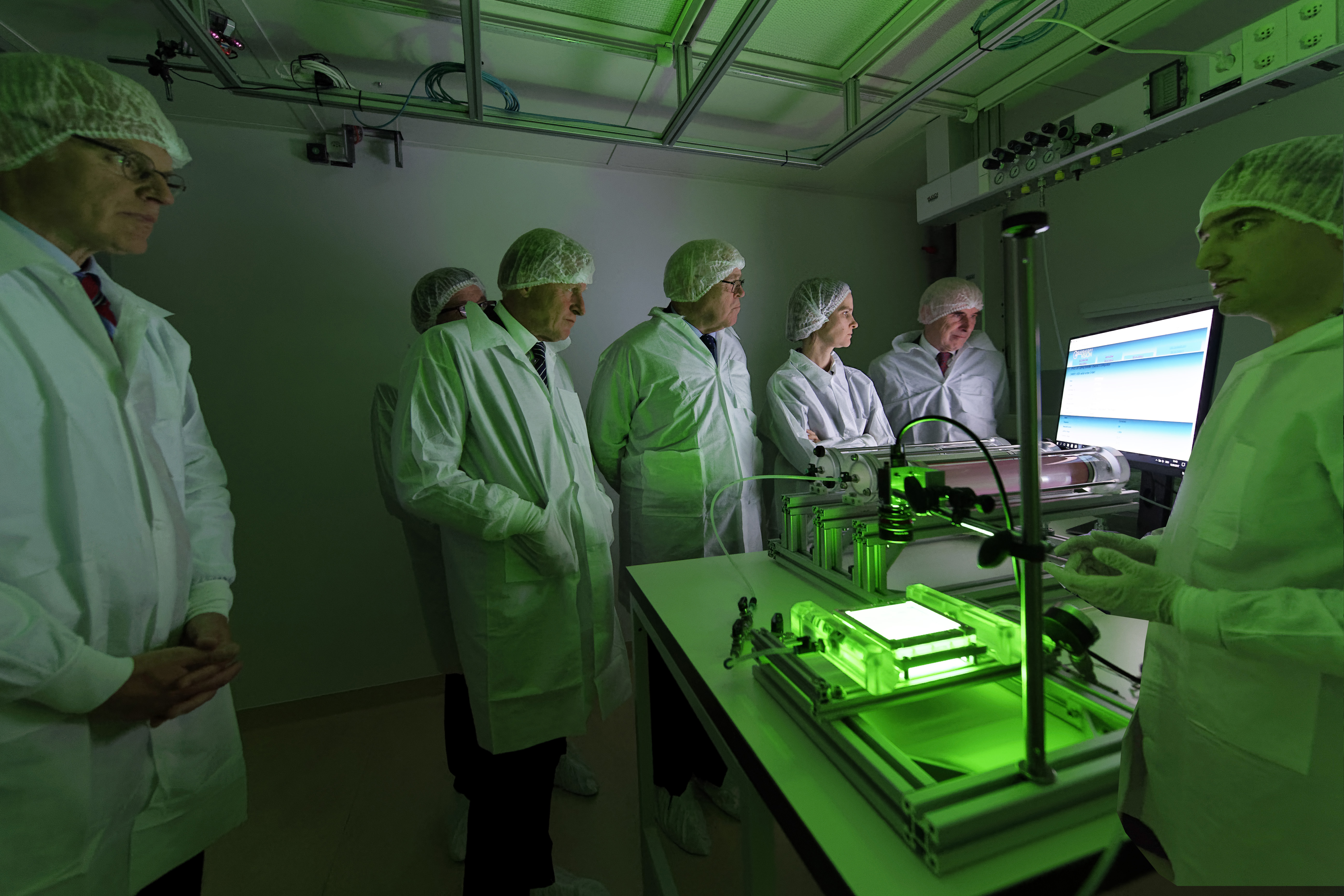 On September 12, 2017, the Werner Siemens-Stiftung (Foundation) visited the Geothermal Energy and Geofluids (GEG) Group to inaugurate signs that thank the foundation for their support of the GEG group and to tour the new GEG Labs, the Hydro-geochemistry and the Hydrodynamics labs. The Hydro-geochemistrylab has been equipped with a state-of-the-art reactive flow-through system and the Hydrodynamics lab is a Laser Lab for conducting so-called Particle Image Velocimetry (PIV) experiments.
It was a pleasure to receive the positive feedback regarding the experimental setups, motivating everyone even further to continue investigating reactive fluid flow and geothermal energy transfer in the Earth’s crust.

The picture (left) shows some members of the Werner Siemens Foundation observing an experiment in the PIV Lab. 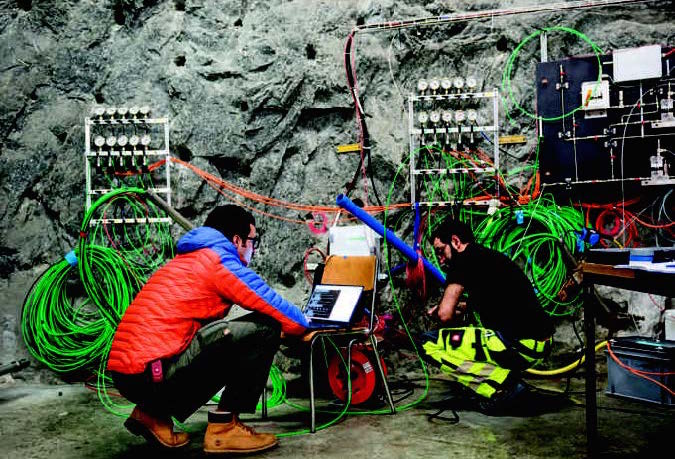 In cooperation with the Geothermal Energy and Geofluids (GEG) group, ETH Zurich researchers, working at NAGRA’s Grimsel rock laboratory, have retreated deep inside the mountain. By fracturing solid rock, they are hoping to re-examine the feasibility of geothermal power plants based on petrothermal technology. (ETH Globe, 1/2017)
read full article (extract from ETH Globe 1/2017) 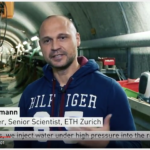 TerraCOH believes it can tap the potential of geothermal energy

TerraCOH’s vision is grand. The fledgling firm would use carbon dioxide emissions — a nemesis to the planet — to power a ­geothermal energy system, which would in turn produce low-cost, clean electricity. 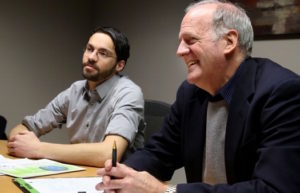 TerraCOH’s Jimmy Randolph and John Griffin are hoping to raise capital for their new geothermal energy system that would produce low-cost, clean energy. They’re planning a plant in North Dakota.

The good news: TerraCOH believes this year it will fire up a small-scale commercial version of its power system. “We are ready to build the power plant,” said Jimmy Randolph, TerraCOH’s chief technical officer. “And we’re trying to raise the money to do that,” chimed in Chief Executive John Griffin. (StarTribune, January 2017)

(About TerraCOH Inc.: TerraCOH Inc. is a renewable energy company based in Minneapolis, MN. Founded in 2014, TerraCOH is in the process of implementing their technology to generate zero-carbon, baseload (24/7) electricity. www.terracoh-age.com)

Minneapolis, MN: Today, TerraCOH, Inc., whose mission is to produce zero-carbon, low-cost electrical power using TerraCOH’s proprietary Carbon Dioxide (CO2) Plume Geothermal – CPGTM technology, announces they are moving forward into the semi- final round of the NRG COSIA Carbon XPRIZE (www.carbon.xprize.org). The NRG COSIA Carbon XPRIZE mission is to challenge the world to reimagine what can be done with CO2 emissions by incentivizing and accelerating the development of technologies that convert CO2 into valuable products. XPRIZE will provide contacts, relationships and funds to help these companies meet their mission with the finalist competing to receive financial awards of up to $7.5 million.

Click here or on the image to go to the Carbon XPrize Semi-Finalists Page. 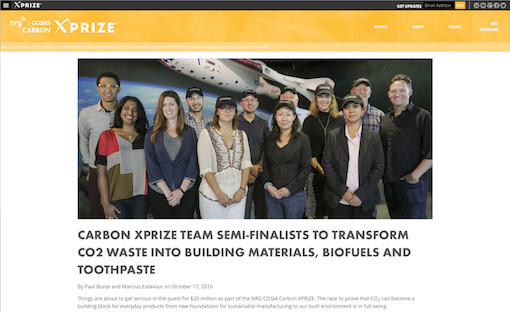 TerraCOH CEO John Griffin said, “Reaching the semi-final stage of the XPRIZE challenge is another indication that our proprietary Carbon Dioxide (CO2) Plume Geothermal – CPGTM technology has the ability to dramatically change today’s approach to power generation by eliminating carbon emissions, while simultaneously utilizing CO2 as a working fluid both in power systems and below ground. This step in TerraCOH’s development is a testament to our committed employees along with the University of Minnesota, where our technology was originally developed, and on-going work continues with our academic/research partners; Lawrence Livermore National Lab, The Ohio State University, and ETH Zurich”

About TerraCOH Inc.: TerraCOH Inc. is a renewable energy company based in Minneapolis, MN. Founded in 2014, TerraCOH is in the process of implementing their technology to generate zero-carbon, baseload (24/7) electricity.
www.terracoh-age.com

Today, the GEG Group at ETH-Zürich and team members SwissGeoPower, TerraCOH, Herrenknecht, Basler&Hofmann, Sintef, and Farner as well as the LTR Group at ETH-Zürich submitted their application to the 100-Million-$-and-Change Competition. According to the MacArthur Foundation, this is “A competition for a $100 million grant to fund a single proposal that promises real and measurable progress in solving a critical problem of our time.” The following is the executive summary of our application:

A global PROBLEM is humanity’s suffering from climate change and nuclear risk. Our SOLUTION is to enable worldwide access to Earth’s internal heat at depths of 5-10 km, resulting in an inexhaustible resource of clean, renewable geothermal energy, available anywhere, anytime, for anyone. Thus, we propose to realize small-scale, distributed, geothermal electricity/heat power plants, providing ample, clean 24/7-electricity/heat with power generation costs lower than those for coal, oil, and natural gas. However, the current high costs of drilling 5-10 km deep, prevent economic use of this energy resource. Thus, the focus of our proposal is the development of a revolutionary, i.e., much-lower-cost, ultra-deep (10 km) drilling technology. The RESULT of our “100&Change”-Project is affordable, clean 24/7-electricity/heat worldwide, reducing global climate change and nuclear risk. 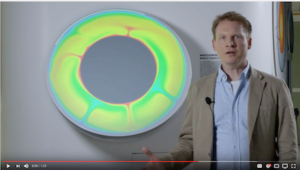 Click here to view our 90-second video that was just one component of the application.

The Geothermal Energy course, offered by the GEG Group, within the Earth Science Masters Program this year has 37 registered students drawn from a diverse range of disciplines. The increase in the number of participants continues a trend established over the past few years, and reflects the increasing interest in geothermal studies amongst the students. 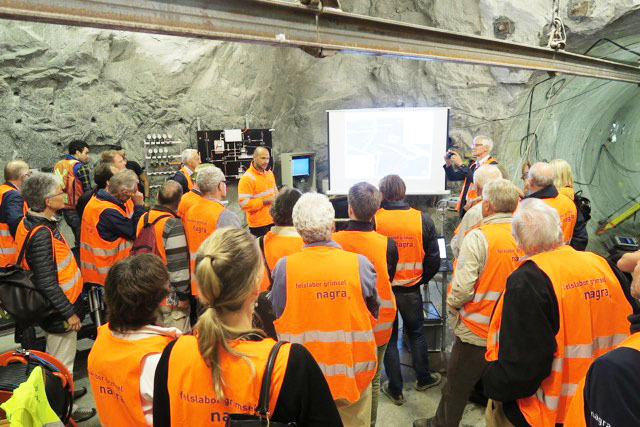 Presentation given by Dr. Florian Amman

On August 23, 2016, ETH-Zürich Prof. Martin Saar (Chair of the Geothermal Energy and Geofluids Group), ETH-Zürich Prof. Domenico Giardini (Chair of the Swiss Competence Center for Energy Research – Supply of Electricity – SCCER-SoE), and the ETH-Zürich Foundation invited the Werner Siemens Stiftung/Foundationand friends of ETH Zürich to an excursion to the Deep Underground Geothermal Laboratory (DUG Lab) at the NAGRA Felslabor (rock laboratory) at the Grimsel Pass.