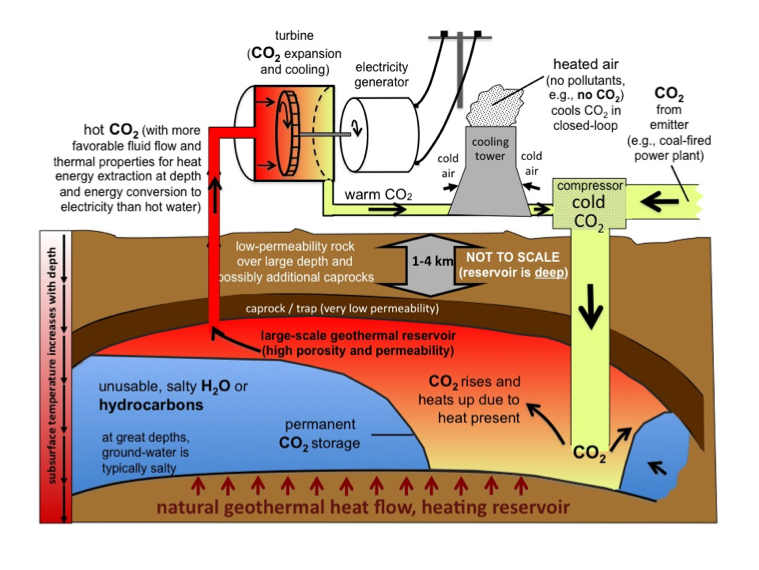 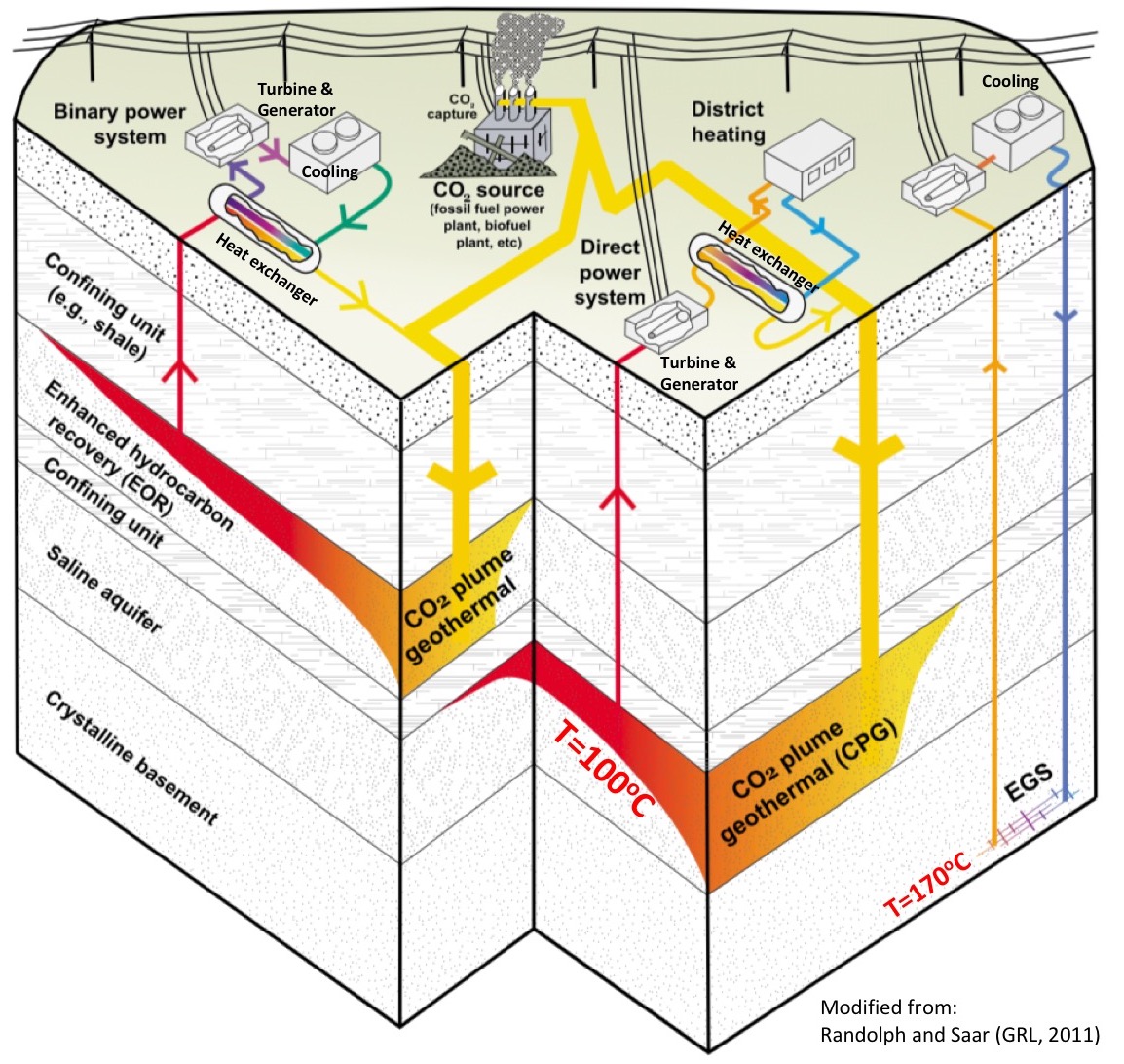 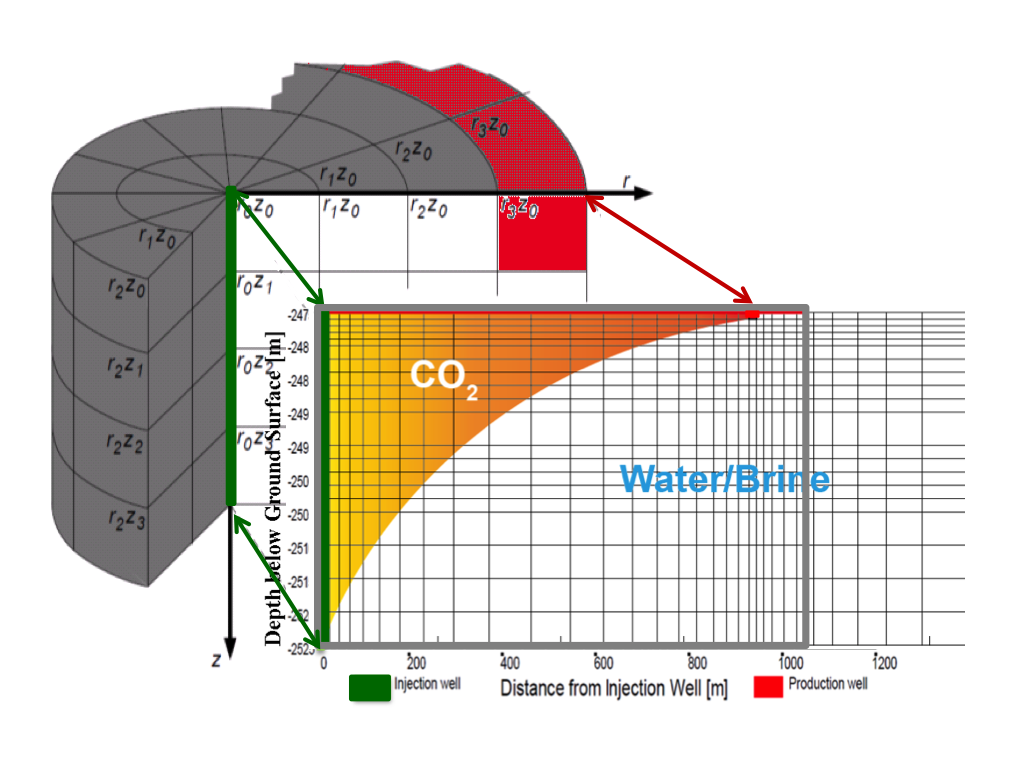 Adams, B.M. On the power performance and integration of carbon-dioxide plume geothermal (CPG) electrical energy production., Dissertation, University of Minnesota, http://hdl.handle.net/11299/17518, 2015. [View Abstract]CO2 Plume Geothermal (CPG) energy is a method for producing electricity from heat extracted from hot rock layers or reservoirs deep within the earth's crust. CPG is differentiated from other geothermal technologies by several factors: 1) CPG uses CO2 as the primary geologic working fluid instead of brine, 2) CPG utilizes naturally permeable porous reservoirs to extract heat, such as saline aquifers or depleted hydrocarbon reservoirs, 3) CPG is deep--a CPG reservoir must have a depth of 1 km to maintain CO2 in its supercritical state; though depths of 2 to 5 km are more common, and 4) CPG utilizes reservoirs at common geologic temperature gradients, unlike traditional hydrothermal which utilizes shallow reservoirs of unusually high temperature. Thus, CPG is intended to be integrated into an existing CO2 sequestration site affording an economic return on CO2 capture expenses by providing carbon-neutral, dispatchable electricity. Even when CPG is used as a base-load power source, it correlates well with electrical demand, unlike wind and solar (Chapter 5). Typically, CPG configurations consist of one or more injection and production wells. These wells link the surface plant with the porous reservoir to create a fluid circuit. Cooled fluid is injected at the surface, heated within the reservoir, and then returned to the surface at higher temperature and pressure which can then be used to create electricity. The variation in CO2 density between injection and production wells creates a thermosiphon which can drive circulation of CO2 without the use of pumps (Chapter 2). The geologic CO2 can be passed directly through a turbine, called a direct system, or heat can be extracted and used to power an Organic Rankine Cycle, called an indirect system. Either system may be used to generate electricity, although a direct system will nearly always produce more electricity than the indirect system. With reservoirs at moderate depth and temperature, these direct systems will also produce more electricity than comparable brine hydrothermal systems (Chapter 3). The reservoir well spacing and diameter affect the average power and longevity of a CPG system. For every combination of well diameter and reservoir depth, temperature, permeability, and thickness, an optimum spacing between the central injection well and a circumferential collection well will provide the greatest power output over time; placing the collection well too close to the injection well depletes the reservoir too quickly while spacing it too far away increases pressure losses, decreasing the overall power (Chapter 4). Likewise, the selection of too small a well diameter will limit mass flowrate, and thus power, while an oversized well diameter may quickly deplete the reservoir and provide no additional benefit (Chapters 3 & 4). This research has provided a significantly deeper understanding of CPG power systems and their operation. The impact of this work is to establish a basis of CPG research to be used in several ways. It can directly inform industrial developments, such as a green-field implementation of CPG or the long-term planning of a CPG-ready Carbon Capture and Storage site. This work may also be the basis for future economic or policy analyses that can further argue for the development of CPG. Thus, this work will help enable CPG as part of the 21st century energy portfolio.